I haven’t been intensely following the synod on the families, because I think I’d rather wait to hear the conclusions at the end instead of getting all worked up along the way. I pray for our spiritual leaders, and trust the Holy Spirit to guide them just like He’s done the last two thousand years or so. I did, though, read the text of one of Archbishop Chaput’s interventions today: http://aleteia.org/2015/10/10/archbishop-chaput-to-synod-fathers-we-need-to-call-people-to-perseverance-in-grace-not-confirm-them-in-their-errors/

The part that really struck me was when he wrote that “The work of this Synod needs to show much more confidence in…the transformative power of grace…..we need to call people to perseverance in grace and to trust in the greatness God intended for them…Marriage embodies Christian hope.”

I have wanted to write a blog on my thoughts on grace for some time now, but I couldn’t figure out how to formulate it, and then the good Archbishop summed it up for me. Let me explain how I got here.

Over the summer, I began to work for CatholicMarriagePrep.com, an online, self-paced, instructor-led marriage prep program. There are essentially 7 topics that couples think about, answer worksheets on, and then an online instructor such as myself answers and expounds upon them. It is amazing and I highly recommend this preparation to engaged couples getting married in the Catholic Church! It is adaptable to older couples, convalidations, and everyone in between.

What has really struck me as an instructor is the third worksheet on the Sacraments. Being able to express their form and the grace attached – even though I basically have a theology degree – was somewhat challenging! And then, we had to give a short testimony on the transforming grace of our marriage, and that’s what opened my eyes to really ask myself if I believe in grace. Because if I did, wouldn’t I be open to it, asking for it, and seeing it work in my life? I had to really think.

Without getting too technical about the types of grace, let’s focus on the big picture: grace is a gift. A free, undeserved help that God gives to His children (CCC 1997). It allows us to participate in the life of God, to attain the divine for which our soul yearns. The first work of the grace of the Holy Spirit is conversion. (CCC 1989).

Who doesn’t want free gifts? If someone offers me free food, free baby clothes, etc, I never say no. Then why is it so easy to ignore the free gift of grace? I know that sin has something to do with that, but I want to focus here on the grace. Because, like Chaput said, marriage embodies hope. Hope of what? Hope that the grace of the sacrament can transform us into the true image of God, who is Love. Marriage has the ability to take us beyond our humanity and into the realm of divine. Love is hard work, made easier with grace, but still requires sacrifice. And I think because the goal of marriage is so transcendental, and so divine, that it is easily attacked, misunderstood, and given up on.

So here’s the challenge to couples married in the Church, who have the sacramental grace of marriage: Live it. Ask for the grace to love your spouse better, to lay down your life more willingly, to love your children more purely. But above all, to be transformed by that grace into Divine Love itself. With grace, our marriages will be a witness the world cannot ignore. With grace, we won’t give up on the hope of the greatness God intended for us.

Want to support the mission and ministry of CatholicMarriagePrep.com? Or, do you love your husband/wife? You can buy shirts here: https://www.agapecatholicministries.com/shop/ 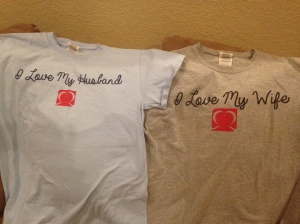 I first met Nathan when I was a youth minister and he had joined my core team. For a while I figured he thought that I was annoying since he was so quiet around me.  Then, one day – over Facebook nonetheless – he told me that I was great and that there should be more “Allisons” in the world. Well that made it obvious he didn’t think I was annoying, if there should be more me’s running around. He reminded me of that conversation the other day, since now Nathan and I have a mini-me of each of us. See? 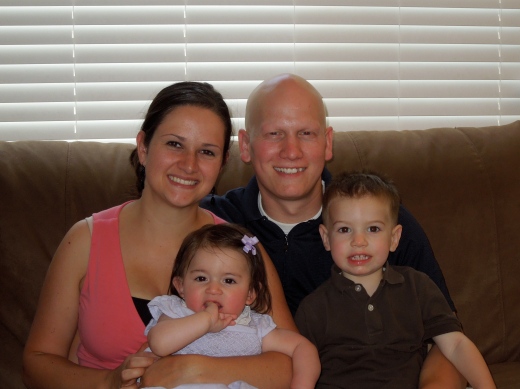 On the day of that Facebook conversation, we didn’t know we’d be getting married. But I did realize that he had a deep affection for me more than a crush, because that’s what love is – loving the other person so much you wish more of them existed. There are several kinds of love. You can love chocolate, you can love your pets and your siblings, but then there is agape – the Greek word for the total, unconditional, and self-giving love which brings more of that person you love into the world (through childbirth).  And so love is pro-life: it is fruitful; it expands and grows.

I love chocolate! I once had a chocolate-themed birthday party. And I loved my cat! I even wrote a song about how much I loved him when I was in elementary school. But I couldn’t marry either of them.  I have no doubt that two men or two women can love each other, but it cannot be married agape love because they cannot have children together.  There are two genders, and the two fit perfectly together to create new life. Two men or two women can’t do that!

With the news of the Supreme Court’s decision regarding homosexual marriage, many heterosexual people seem to say “whatever, no big deal, that decision doesn’t affect me.” But it does, because marriage is the foundation of our existence and the foundation on which society is built.  Marriage used to mean babies, and that meant carrying on your lineage, it meant a workforce to pay your social security. But most importantly, marriage is about our children, and this new ruling seriously affects our children.  Psychology has shown the negative effects on children in the absence of a mother or a father. Would anyone want to intentionally deny a child of knowing their mother or their father? We already feel sympathy for a child who lost their parent through divorce or death. Children can rise from these unfortunate circumstances, and all healing comes through Jesus Christ, but why are we ruling for laws to make this the norm for our children? Are we saying we WANT them to be denied a mother or a father?

Consider this: (1)
-In a study of 6,500 children, father closeness was negatively correlated with the amount of a child’s friends who smoke cigarettes, drink alcohol, and smoke marijuana.
-63% of youth who commit suicide are from fatherless homes.
-80% of rapists motivated by displaced anger come from fatherless homes.
-71% of all high school dropouts come from homes without a father.

When “love” and marriage become about pleasure and feeling good, instead of about sacrifice and children, people get hurt. We’ve seen this start since people started  using contraception. Look at these staggering facts:

Also, Catholic charities in several states have been forced to close down by the government because they refuse to place children with homosexual couples. With this ruling, it will be more common to close down Catholic Charities, which is the 3rd largest charitable organization providing food, shelter, counseling, adoption, and pregnancy services to several million people each year. (6) Shutting these places down because they aren’t “PC” is simply wrong.

Simply put, love and marriage need to be for the purpose of babies; an agape love that is open to life.

For more articles on this topic see: