I know the shooting at Roseburg happened weeks ago, and is “old news” in the media world, but those wounds never go away. As such, it has taken me weeks to work through these thoughts and type them out. So, here goes:

I was disheartened by the news of the shooting in Roseburg. So much more tragedy, senseless shootings, and death.

I was also surprised about how many people voiced up about needing more gun control laws, people who are also for abortion and for assisted suicide. I was confused on how one could be upset about the loss of life in a mass shooting at a college (which I am, too), but actively support the loss of life in the womb, in sickness, and in the elderly.

I realized it comes from a false sense of compassion. We as a society hate suffering. I think for some it is the ultimate goal in life: to not suffer. A child in the womb who is going to have a disability or disease? Doctors advise mothers to end the life before it really begins. Or, who was unintentionally conceived and has the potential to be “unloved?” It’s a mother’s choice, apparently. A terminally ill patient? Assisted suicide, because suffering is the worst thing that can befall a person. An elderly person who can hardly get around? We find them to be a burden on society, not considering what they’ve given in their lifetime or the wisdom they’ve amassed.

But then there is a shooting on a college campus. Teenagers, barely adults. In the prime of their life, having done nothing to deserve death, studying to get an education to be tax-payers and maybe parents someday. That’s when people get vocal about morality. Somehow, these lives are more valuable? I guess to some, shootings are the real tragedy because ending the lives of the suffering doesn’t matter?

Whoopi Goldberg on “The View” doesn’t get it. “Should abortion be equated with gun violence?” she asks. Well, the bottom line is yes, because a life is intentionally being ended.

To me, and to the Church, they are all the same. They are all tragedies, because life has been taken. It is not our place to play God and to decide who lives or dies based on how much they are suffering or how much we think they will suffer. Perhaps some of these mass murderers have thought they are ending other people’s suffering? As confusing as it is, deciding the value of life based on suffering is a slippery slope.

This is not a political blog. To be honest, I’m not sure what the answer is to the violence besieging our country. I do suspect that it is a combination of laws, mental health, and moral reform. I don’t think one reform independent of the others will be enough. The fact that the Roseburg shooter asked victim’s religion is also disturbing, considering that the current cultural climate is so hostile to faith. 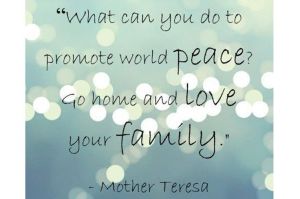 Also, I think we must teach our kids to respect all life by our witness. By donating food to soup kitchens, praying for the imprisoned, visiting a nursing home. To do anything and everything to cultivate the conviction that life is worth respect, at any stage and for everyone.

As Christians, we also need to struggle to understand the value of suffering, so we can be convicted of its purpose. To the goal of life is not to avoid suffering, it’s to accept suffering as our path to heaven. It’s not an easy topic, and may take a lifetime to grasp. But here is could good place to start: Peter Kreeft on God’s Answer to Suffering: http://www.peterkreeft.com/topics/suffering.htm