(Warning: Graphic Content. Do not read while you are eating.)

A little over a year ago we bought a new home! (see: St. Joseph answers prayers). We knew it was going to be a bit of a fixer upper, but we had no idea how bad it was going to be until the smells starting getting worse and we started to tear down walls.

Recently we remodeled our upstairs main/master bath. It was the second most disgusting bath Nathan has ever remodeled, due to the leaky pipes behind the shower wall. See more black mold (and rotting subfloor) here: 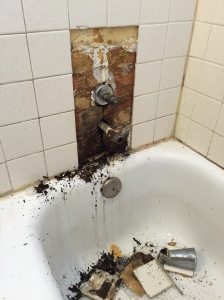 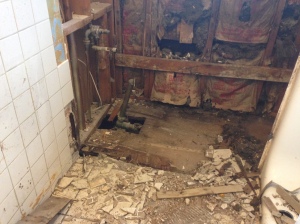 Then we started to gut the basement. This is where the majority of the smells come from. Dead mice. Actually, at least 3 dead mice, 2 rotting mice nests, and thousands of tiny turds line all the studs and ceiling of our basement living room. I’m sure they’ve been here for years. It is so disgusting I want to vomit just writing about it, but here are a few pics in case you are morbidly curious. 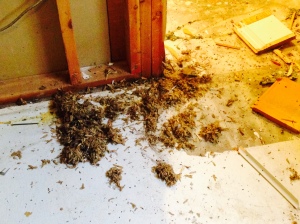 this nest fell from the ceiling and smelled the worst because it actually had a dead mouse in it, discernible only by the long, black tail… 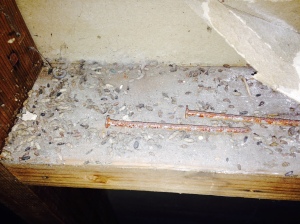 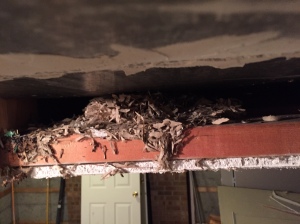 this nest is still in the ceiling and has treasures waiting to behold.

Before we looked at the house in person, the pictures online made it seem not too bad. Before we bought the house, we knew from seeing it in person that it needed a little bit of work, but as we lived here the signs became more noticeable that something was wrong. It had made me think of what Jesus has to say about whitewashed tombstones:

“Woe to you, scribes and Pharisees, you hypocrites. You are like whitewashed tombs, which appear beautiful on the outside, but inside are full of dead men’s bones and every kind of filth. Even so, on the outside you appear righteous, but inside you are filled with hypocrisy and evildoing.” Matthew 23:27-28

The previous owners of the house knew about the smell because they kept the basement doors closed and had no furniture in there. Instead of gutting it, they slapped some paint on the walls and called it “remodeled.” But there was no life in that room; nothing could survive in there with dead mice rotting in the walls.

So many times it seems easier to try and cover up our sins and wounds instead of trying to get to the root of the problem and deal with them. What we really need to do is tear down the drywall around our hearts and get to the smell, to the rotting wounds of sin and go to Confession! Perhaps an apology or forgiveness are also in order to bring healing.

And now, by tearing it out and rebuilding, we’ve built something way more beautiful than what was there before. That’s what grace does to our souls. 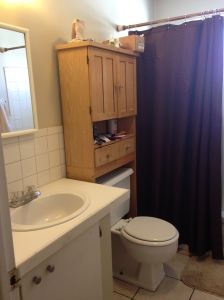 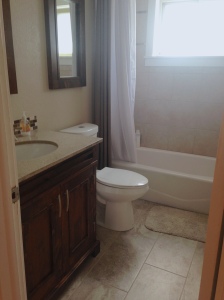 So whatever you do, don’t let the smell of your sins turn you into a whitewashed tomb full of dead bones and filth. Let our house be a lesson for your interior house life.

“So many people come up to me and say, ‘But I’m a good person.’ Sin doesn’t make us bad. The wages of sin is death. Sin makes us dead. Only God can bring the dead to life.” -Louie Giglio, pastor, quoted from our worship night at Red Rocks.

“For the wages of sin is death, but the gift of God is eternal life in Christ Jesus our Lord.” Romans 6:23

*you can see all of the bathroom before and after photos at: www.facebook.com/SuperiorHomeRemodel

I used to be a youth minister.  I worked in a church where I was in front of people all the time. Talking, leading, and ministering. I had to be on top of my game, spiritually speaking, if I was going to be effective.  Sometimes it was more about deepening my personal relationship, but sometimes it was that outside pressure that kept me going to the 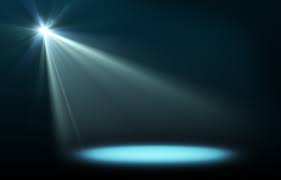 Chapel and waking up for daily Mass.  And so there I was, at the Church all the time because I was the face of the youth in our church. I was in the spotlight.

And then I got married. And immediately the kids started coming and I was now at home. All the time. It was more of a hidden life now – for most of the day it was just me and babies who can’t talk. The way I was used to praying involved daily mass and frequenting the adoration chapel, and I no longer had those luxuries for my prayer time. And so my priorities became eating, dishes, and laundry, and it became difficult to find time to pray. “They don’t even know what prayer is; they wouldn’t notice the difference if I prayed or not.” Or so I thought. I convinced myself that my spiritual life wasn’t as important now that I wasn’t in the spotlight.

But I was incredibly wrong. I remember when it hit me. I was in line for confession examining my conscience. It has been a while, but I hadn’t really done anything that bad. I’m a mom now, so I don’t really have time to sin, right? And then I started to recall every time that my husband and I had fought. Every time I had lost it and yelled at the kids, every time that I had failed to discipline in love. I realized that my spiritual life was more important now than ever before because I was responsible for the souls of these tiny children who do not know any better. That I am accountable to my husband and our vows to be leading him closer to heaven.

So while the hidden life, the “interior house life” of a mom may seem inconsequential, it will impact your family and society for generations to come.

I think of Mary, who we know so little about in the Bible, but yet she was the most important person in Jesus’ life. Her role was so great, and yet so hidden. With every newborn comes an adjustment in routine and schedule. But that doesn’t diminish the importance of prayer; I think it increases it. 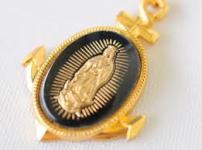 “But when you pray, go to your inner room, close the door, and pray to your Father in secret. And your Father who sees in secret will repay you.” Matthew 6:6

Note: I was tempted to use a picture of a poopy diaper as my visual, but I will refrain for all of our sakes…we see enough of ’em as it is. 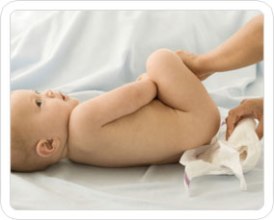 We were visiting family a little bit ago and Timothy was playing so happily with his cousins that a few hours went by before realizing he had a poopy diaper. When I went to change him, the poop had hardened around his bum, making it difficult to scrape off and leaving a red sore. He screamed and cried that it hurt, and I told him that’s what happens when you sit in a poopy diaper for too long. I told him even though it hurt I had to clean it off so he could feel better and so his butt could heal.

And as I’m saying this to him, I’m realizing that this is like sin and vice in my own life. I get comfortable sitting in my own c.r.a.p., justifying that I’m just an angry person who yells a lot, or that I can be selfish in my marriage because I already give a lot to my kids.  It hurts to peel off this layer of garbage from our lives that we have grown so used to. But without the hurt that comes with separating ourselves from the poop, we won’t be able to put on the Desitin of healing. Too descriptive? Probably, but it worked for me.

And I’ve been thinking about that analogy a lot these last few days as Advent begins. What a perfect time to clean ourselves off to prepare to receive the King of Kings into our heart at Christmas.  And then I start thinking that maybe it’s time to potty train Timothy… 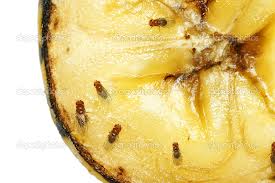 A few weeks ago I brought fruit home from the store…and the fruit flies started to appear. I have spent countless hours trapping them with inverted cones, vacuuming them up with our dust buster, and killing them with my bare hands. We have had hundreds overtaking our house at one point. They’ve also taken over my sanity since all I do is think about fruit flies. I see them in my bedroom, I dream about them in my sleep. I stop what I’m doing to track one in the kitchen for a good 5 minutes until it’s dead.

Over the weekend I finally made the traps with banana bait and a paper cone. I easily caught over a dozen in each, but that wasn’t the last of them. Every day since then, I keep thinking that I’ve gotten them all and I let down my guard. Then I see one flying around and I kill it with my hands. Right after that, I see two more flying around the kitchen. Nate tells me they aren’t asexual but I swear they can replicate on their own. Timothy thinks it’s a fun game to run around the house hitting a wall saying, “die, fruit fly, die!”

Just when I think its safe and I put the fruit out again, several flies re-appear from hiding. When I’m not paying attention and I leave food out, there those flies are again. And that’s just like sin, and those fruit flies are seriously the devil. The wages of sin is death (Romans 6:23), and we must always be on guard against temptation to sin. 1 Peter 5:8 says, “Be sober and vigilant. Your opponent the devil is prowling around like a roaring lion [or sneaky fruit fly] looking for someone to devour.”

Yikes! For some reason I thought that moms didn’t sin that much since they have so much else on their mind. It seemed temptation wouldn’t be the same as it was in my youth. Although my sinfulness hasn’t changed (just ask my husband!) the kinds of sins are different. And that’s when temptation comes the easiest – when we aren’t paying attention and when we least expect it. I find that in motherhood my biggest trial is making excuses, sadly usually using my kids as my excuse. My kids made me crazy, that’s why I did such and such. I have no time to pray because I’m taking care of the kids. I can’t go to confession because I have kids…

Last night I was in such a bad mood as I tried to catch a fly in our bathroom. Those *&$# things really are making me crazy and I was letting my husband know it. As he watched me, he said, “Why don’t you offer it up?” And truthfully, it hasn’t crossed my mind to allow this opportunity to make me holy.  But I guess it did teach me a lesson about sin. We always have to be on our guard against sin and temptation in any form. Until heaven, we will never be safe. And now if you’ll excuse me, I just found another fly to go hunt down and destroy.

“Lead us not into temptation, but deliver us from evil. Amen.”